Learn how the Easytork actuator can
improve, simplify, and bring peace of mind to your process.

Easytork’s pneumatic actuator working principle has made many major industry advancements. We have improved on external air reservoirs used in emergency shutdown valves by incorporating the air reservoir directly into the actuator. Similar to springs' action in a spring return actuator, when there is air failure, the pressurized air stored in the air reservoir drives the Easytork actuator to fail safe. By eliminating springs and having only one moving part, Easytork exponentially increases reliability and efficiencies of pneumatic systems - these main features to follow.

How do you monitor the condition of springs? You can't without expensive positioners and a lot of training. You can, however, easily monitor and take preventative actions when actuators leak. Predictive maintenance is made easier through Easytork's air reservoir fail safe mechanism. And with only one moving part vs. at least five in a spring return actuator, you have less parts that can go wrong.

Assets do not break down. Components do.

The Most Rugged Seal

How much time is your maintenance spending to replace an actuator's O-rings? Seal failure is the most common failure point and the probability of seal failure increases through regular usage, poor instrument air, and poor environment air.

It is crazy to us that almost all actuators still use O-rings, when in fact O-rings are meant to be used between two flat non-moving surfaces (static sealing).

Easytork's sealing is not only thicker, but our lip-seal design is manufactured specifically for dynamic sealing which reduces the need for maintenance even in tough environments, constant usage, and dirty instrument air.

No Springs = Predictable and Safe

Damaged springs go unnoticed until it's too late

"A review of nuclear industrywide pneumatic system problems indicated that 49 percent of all failure events resulted from contamination in the system...the principle source of foreign material is rust within the instrument air system and induction of foreign material (primarily dirt) with the air intake."

Have you ever wondered why there is so much contamination inside actuators? It's not all from "instrument air". No matter how well-built, any actuator with springs will vacuum in the environment into the actuator, wrecking the seals and the springs. 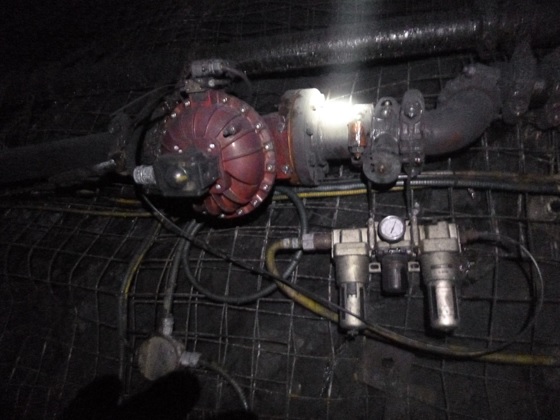 For any questions on Easytork’s pneumatic actuator working principle, please contact us!


All the Functions You Need in One Unit

Optimize Your Process Management and Reduce Inventory by Up to 67x

How much capital is invested in your stock room and how many lines of bill of material are inputted in your asset management system? Think about all the actuator functions you need to prepare for: double-acting, fail-open, fail-close, 60 psi air supply pressure, 80 psi, high temp, low temp, etc. You get the point. And if you don't have it at a moment's notice, how much time is maintenance spending to configure to the required function(s), and how much in $ premium are you spending for overnight need? It's a lot, and we get it.

Each Easytork actuator will cover all but the most extreme applications you will need. That's a lot of operational and time savings. Need to convert an actuator from double-acting to fail close or fail open or vice versa? It will take maintenance 60 seconds to change our actuator's functions. Have a high temperature or low temp application? Our standard line is already made to cover this wide temperature range.

Have you ever had to install or remove springs in order to switch functions of actuators? We have, and this process annoyed and scared us. Just ask your maintenance if they ever had a close brush with getting hurt by springs.

Our solenoid/pilot/trip valve manipulates how the air path flows within the Easytork actuator based on the knob adjustment and installation orientation.

Air reservoir drives actuator fail-safe when supply air pressure drops below trip valve's trip point. It fails in the close or open position by how the air line is connected between the actuator and the reservoir. Our patented design simplifies the trip valve and the piping between the actuator and air reservoir into one clean package so that it takes less than 60 seconds for someone to change the function of an Easytork actuator.

Each Easytork actuator unit can be used for:

Modulating (Double Acting, Fail Close, Fail Open): Same concept as above, except use the NAMUR Trip Valve (NTV) instead of our solenoid/pilot valve for fail safe. 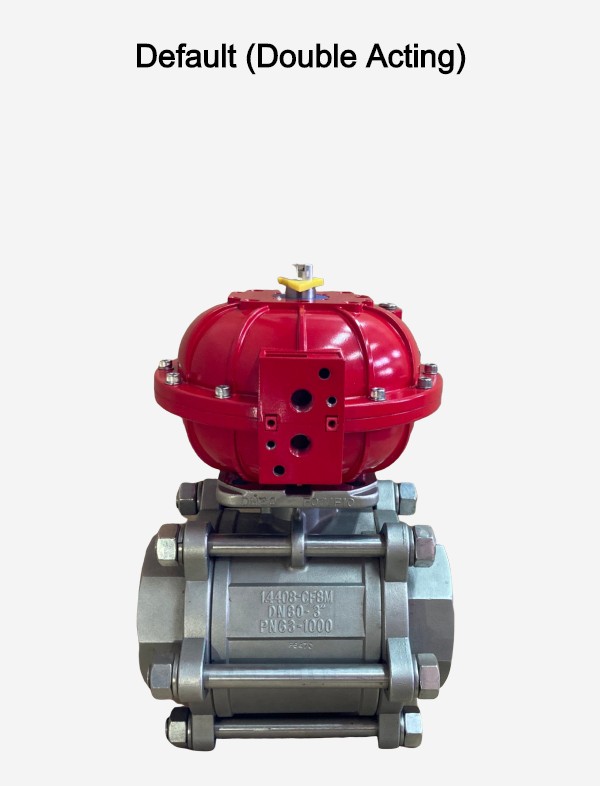 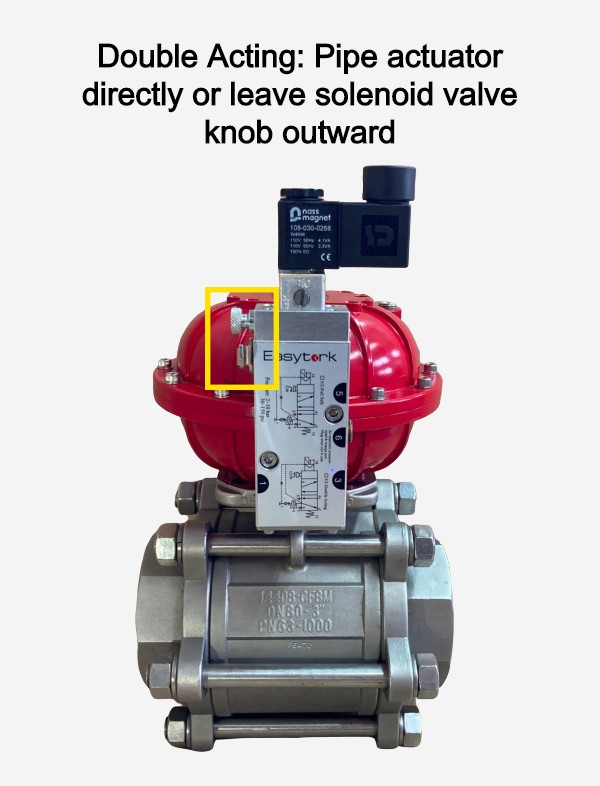 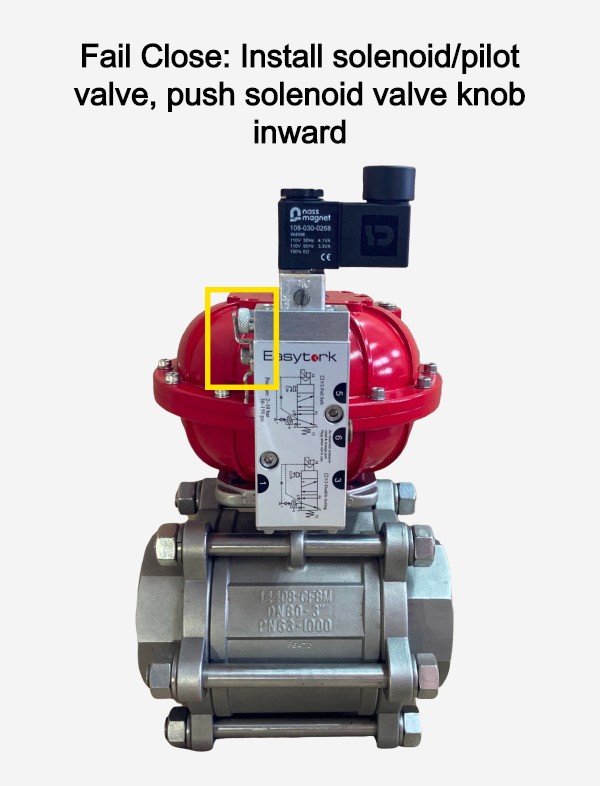 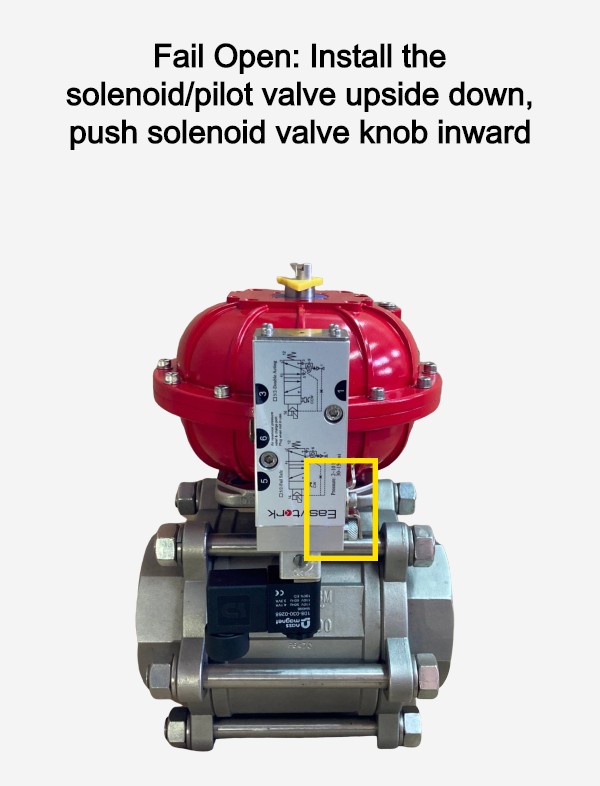 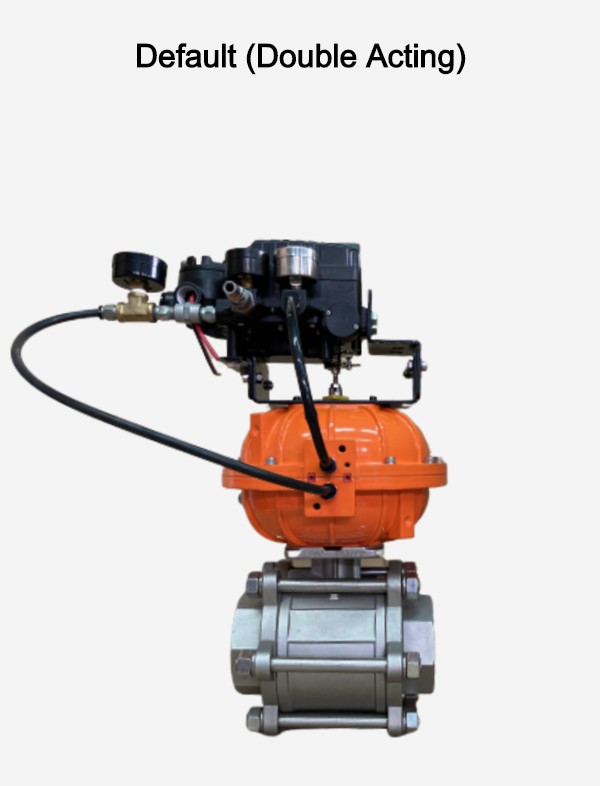 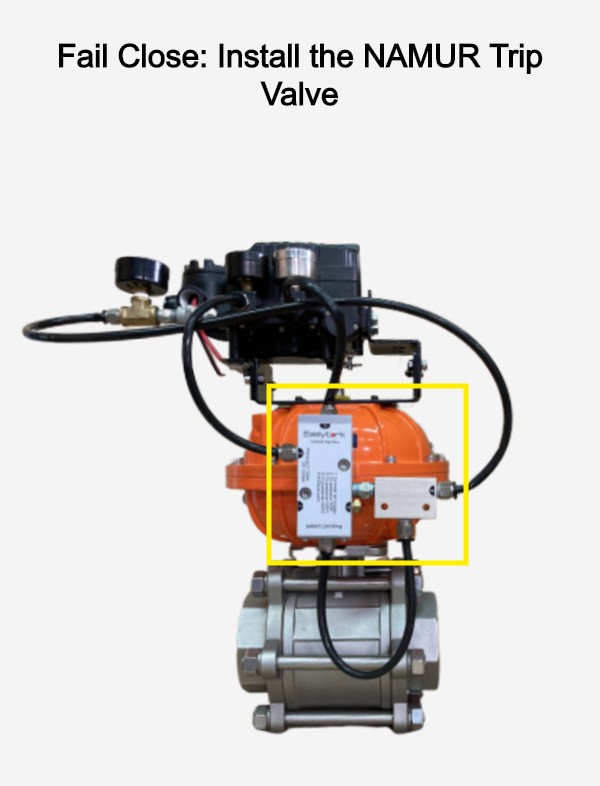 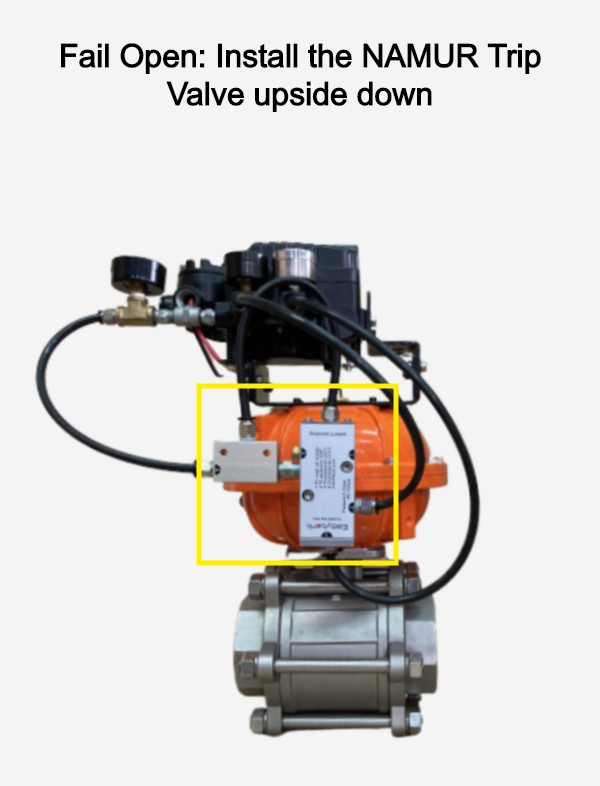 Video Demo of Function Changes all in One Unit:

Save up to 67x of Inventory Consideration

Eliminate up to 67x inventory and supply chain considerations. Our eight actuator models cover multiple functions and solutions, allowing operators to get up and running quickly without having to worry about stocking a multitude of parts, bill of material, and assembling on-site. Plus, no dangerous springs to work with. 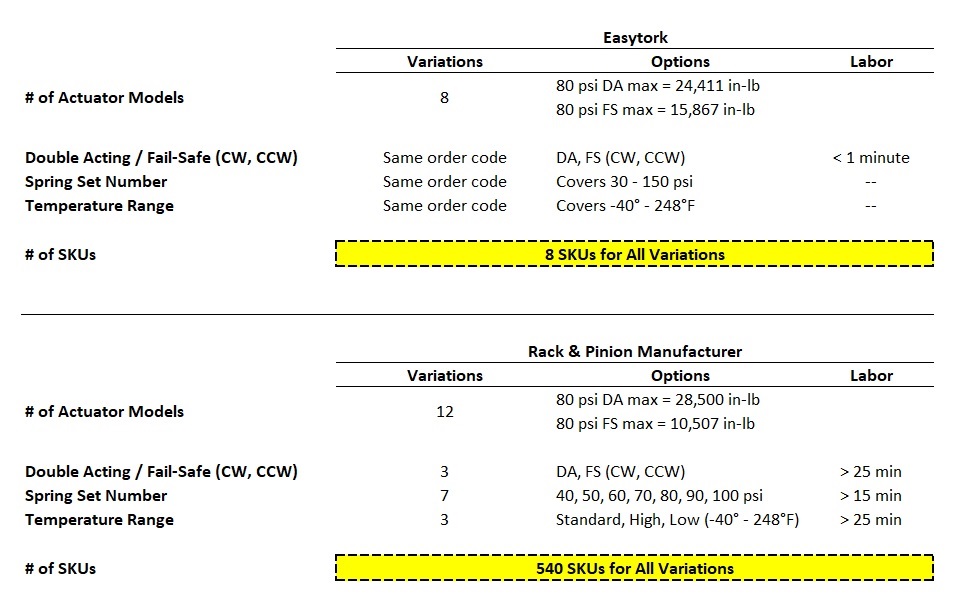 Direct Mounts to Most Valve Brands

The Most Adaptable Actuator in the Market

"Does this actuator fit that valve?" You probably spend a lot of time and money to match different brands of actuators and valves together. Easytork helps simplify things. Our actuators mount to almost all valve brands and actuator accessories such as limit switches and positioners. Whether it's for a new large-scale project, maintenance/retrofit, or a 1 unit replacement, Easytork will bring a peace of mind from planning to installation to operation and get your process up and running quickly.

With multiple flange patterns and VDI/VDE on both sides of the actuator and with adaptable shafts and inserts, the Easytork actuator is the easiest and most adaptable actuator to mount to most valves.

We have one size mounted to a minimum of seven different valves quite easily, with minimum equipment required. So if you upgrade a plant and you wish to reduce your inventory and variability for your maintenance, you can do this with Easytork.

Video Testimonial provided by a customer

Most Compact and Efficient

To put this into perspective, a spring return actuator for a 12" butterfly valve would weigh 120 lbs and would require a team to assemble. An Easytork actuator for the same valve weighs 50 lbs and one person can complete the assembly. Easytork's size and weight have significant impact for applications where space is rare commodity such as skid applications.

Fast Acting Solution: Easytork can rotate the same 12" butterfly valve in less than 1 second where spring return actuators take at least 2 seconds or even longer. 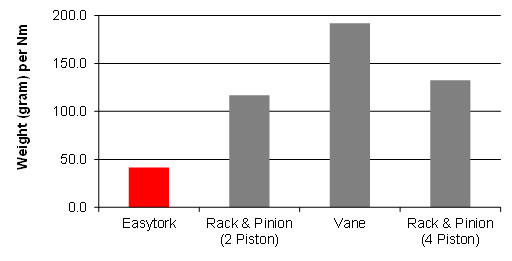 Before / After Easytork Installation Comparison: 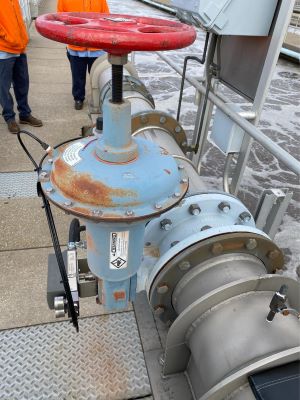 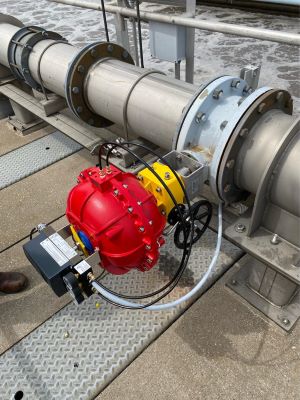 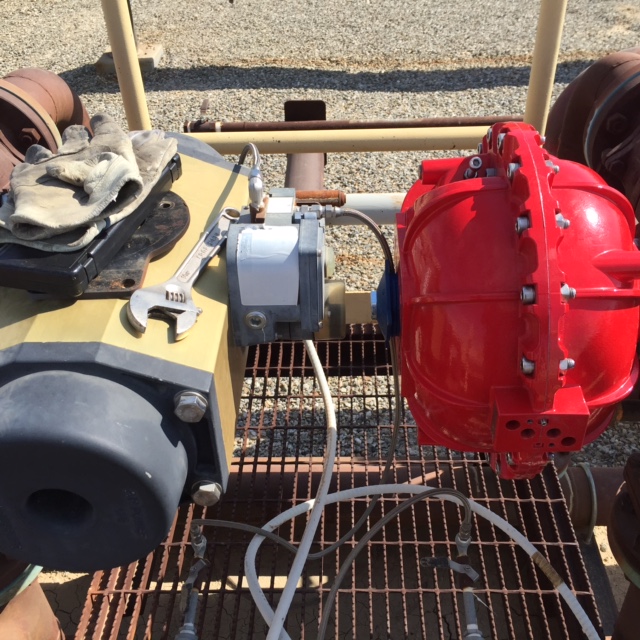 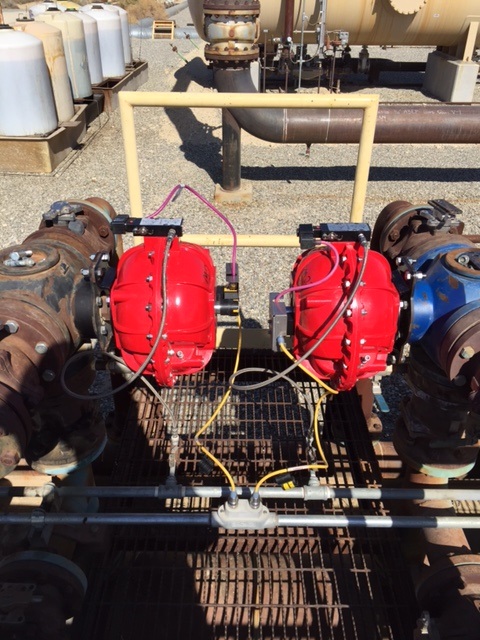 The Most Accurate and Fastest Actuator for Control Valves

Limited by control valve speed of response (Lambda or T86) for small or large step changes? Our technology is a paradigm shift of what is attainable. It combines fast-acting and accuracy into one package.

The Easytork Control Actuator line is a game-changing development for the pneumatic actuation and control valve markets. It replaces the rotary spring & diaphragm style actuator’s reason for existence. Compared to RS&D, the ECA has better accuracy and is more economical, 1/10th to 1/4th the weight, 1/6th to 2/3rd the size, and consumes 1/4th to 1/2 the air consumption.

The ECA is the only rotary-to-rotary actuator that couples directly with rotary control valve’s shaft. With the cleanest motion transfer between valve and actuator, Easytork is able to achieve high degrees of accuracy to the control valve. An End User's Three-Year (and On-Going) Journey with Easytork:
“I am a believer in these actuators… I am certain there are others out there who have been looking for the same solution."

Corrosive & Dirty Environment:
How Easytork actuators thrived in a challenging actuation application while reducing total cost of ownership by over 77% for a mining operator